Woolmark announced the winner for 2014 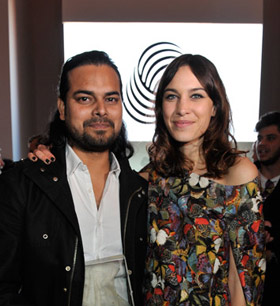 The Woolmark is the world’s best known textile fibre brand, established in 1964.
The Woolmark brand is owned by Australian Wool Innovation (AWI), a not-for-profit company owned by more than 27,000 woolgrowers. AWI’s vision is to be a significant contributor to a vibrant, stable and profitable wool industry providing the world with the best natural fibre. The company works throughout the global supply chain – from woolgrowers through to retailers.

The company mission is to enhance the profitability, international competitiveness and sustainability of the Australian wool industry; and increase demand and market access for Australian wool.

Merino wool provides stability, resilience, softness and luxury to the tailoring industry. The fibre has long been a favourite of designers, but younger consumers, born in an era of ‘disposable’ fashion know too little about the natural benefits. Wool is a 100 per cent natural, biodegradable and renewable fibre.

Sheep live on grass, water, fresh air and sunshine. Wool is a fibre that is grown – not man-made. Every year sheep produce a new fleece, making wool a renewable fibre source.

“For me, Rahul has won because of his ability to apply his knowledge of embroideries through wool, one of the most versatile fibres with originality in an unexpected way” explained Frida Giannini, Gucci’s Creative Director soon after the announcement.

After a global search, reaching across 20 countries and involving over 48 designers, five talents reached the final round: ffiXXed, for Asia; Christopher Esber, representing Australia; Sibling, for Europe, Rahul Mishra, India and Middle East; and Altuzarra, for the USA.

Alongside prestigious recognition, the winner receives a financial contribution of AU$100,000 and the opportunity to be stocked in the most important retailers around the globe including Harvey Nichols, Saks Fifth Avenue, 10 Corso Como, Joyce, David Jones, Colette and mytheresa.com.

“His interpretation was so delicate and beautiful”, said Alexa Chung. “I was really moved by Rahul's story. I believe he is well deserving of this award.”

Rahul Mishra’s Merino wool collection, that won the prestigious award, was based on craftsmanship and his incredible knowledge of techniques and embroidery.

The designer declared: “I feel like this is a dream and this is giving me new hopes for my future career. This award will change the perception of global fashion in regards to Indian fashion and this is all because of wool - an amazing fibre, the fibre of possibilities.”

The collection will be available in partner retailers globally from August 2014.
The nominees for the 2014/15 IWP regional competition will be announced in April 2014.


If you are interested in wool, you can take part in Men's Style.

Hits: 1317   Ordering Art Work Online: What To Look Out for?
5 surfing brands you need to know about
The Top 5 Footwear Trends to See You Through 2020
Reasons to wear gold bracelets
White Label World Expo London - Why should Manufacturers attend it?
Adam Lambert is the winner of Most Stylish Men September 2019
5 Must-Have Summer Accessories Women Should Have
How to Incorporate Your Leggings for Your Business Casual Look
What is the Best Color to Wear On a First Date?
Why Is Online Betting So Popular?