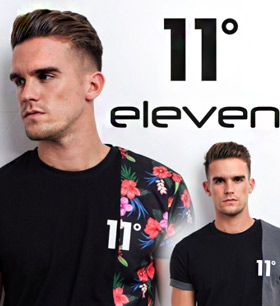 When you think of the UK I bet you think of bad weather, fish and chips and the royal family. However, it’s not all tea and crumpets in the fashion scene at the moment. There’s quite a few up and coming brands out there that are taking over the UK with a vengeance and it’s now become part of the norm to see many UK celebrities rocking these brands instead of your classic Nike and Adidas clothing. The quality and designs of these brands are what put them on the map so I asked urban retailer Thomas Gun which brands in particular are doing so well in the UK market. Here are the four they specifically mentioned.

11 Degrees
This brand has been promoted by many famous UK celebrities (Gaz from Geordie Shore is one of them) and its rise in popularity has been welcomed by many retailers. It’s simply but effective logo is instantly recognisable and the clothes they produce are really tailored to shape and fit perfectly. With the main business situated in Cumbria, which is slightly unusual as you’d expect it to be in one of the major cities, the clothing lines have a very UK feel to them and it’s perhaps this reason why they are selling so well in Britain.

AKA
Created in the heart of one of Britain’s biggest and most vibrant city’s, Manchester, AKA has a loyal following and has increased its followers massively in the last few months or so. The website is really well done and it allows them the ability to really show off their clothing range without bad navigation. Their r range of women’s clothes in particular have caught many peoples eye in the urban apparel world.

Friend or Faux
Located in the Newcastle region, Friend or faux have some seriously impressive clothing ranges for a local business, although they deliver everywhere. You can easily see the quality of the designs and the prints when you handle their ranges and the creativity from which they are designed from is allowed shine. Their new ranges are more focused in summer wear but they also have a large collection of lines to choose from if you’re looking for something a bit more heavily weighted bring you into the winter months.

Fi5th
As with AKA, Fi5th is located in Manchester but don’t confuse the two. Although few of the clothes are similar, each has its nuances that makes it easy to tell them apart. Fi5th in particular has some really cool tee shirt designs that makes it stand out from the rest of the urban apparel brands.

Hits: 1453   5 surfing brands you need to know about
The Top 5 Footwear Trends to See You Through 2020
Reasons to wear gold bracelets
White Label World Expo London - Why should Manufacturers attend it?
Adam Lambert is the winner of Most Stylish Men September 2019
5 Must-Have Summer Accessories Women Should Have
How to Incorporate Your Leggings for Your Business Casual Look
What is the Best Color to Wear On a First Date?
Why Is Online Betting So Popular?
A Guide to Treating Yourself This Winter