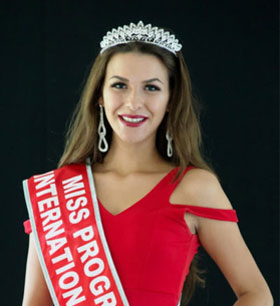 The fourth world finals of the contest organized by Giusy Nobile and Giuseppe Borrillo held in Francavilla Fontana. Natasha won thanks to her project for students to prevent sexual abuse of minors in the Benelux.

FRANCAVILLA FONTANA - Informing students about devious methods used by those who commit sexual abuse of minors, through the autobiographical testimonies of the victims. In two words: "Stop loverboys". This is the title of the project on human rights that allowed the 18 year-old representative of the Benelux, Natascha Fischer, of Almere, the Netherlands, to win the title of Miss Progress International 2016, in addition to the one of Miss Progress Human Rights.

The new queen of progress was elected at “Teatro Italia” of Francavilla Fontana, in the event presented by the top model Giada Pezzaioli and the Italian-Korean actor Yoon C. Joyce, organized for the fourth year by cultural association In Progress chaired by Giusy Nobile and directed by Giuseppe Borrillo.

"I read books written by under-age victims of sexual abuse and thought - says Natascha - it would be interesting to carry out a project intended to raise awareness of all students of the 2,352 high schools in the Netherlands, Belgium and Luxembourg about the premeditation of these abuses, even perpetrated in my school.".
When asked what she most liked of Italy, Natascha’s replied, showing off a bright smile, without hesitation: "The pasta! But tomorrow I go back to eating potatoes, which are almost ubiquitous in our dishes.".
Another person very satisfied for the success of Natascha is her national director, Nanny Verwey-Nielen, guest as many others pageant organizers, who enjoyed the tour around Puglia, discovering the cultural and natural beauties of the region.

The final show was also enriched by the presence of Liz Arévalos, who won the 2015’s edition and realized her project, the illusionist Dodo and the Ohm. The coreographies were Matteo Giua’s and Rosaria Aprile’s.
A two-hour show, broadcasted live on TV and the web by Canale 85, during which the attention was focused on the projects presented by twenty contestants from all over the planet, who also delighted the audience by showing off their distinctive national dress: a festival of colors,, history, traditions and cultures. The other titles were assigned to the British Bethany Cammack, Miss Progress Health; Marianella Chavez Serrano (from Coco Island), Miss Progress Environment; Yameesha Rasadi (Sri Lanka) Miss Progress Cultural Integration and Carmelle Martinez (Canada), the most voted on the Internet.

The Brazilian Rafaela Torres has been awarded for the most beautiful national costume.

The maestro Antonio Zanata created a photo-reportage titles “Profiles of the world” in which all the twenty Ambassadors of Progress were immortalized in profile with their national costumes, recalling the image of the logo of the contest, in which a woman seems to hold up the world.

Hits: 2237   5 surfing brands you need to know about
The Top 5 Footwear Trends to See You Through 2020
Reasons to wear gold bracelets
White Label World Expo London - Why should Manufacturers attend it?
Adam Lambert is the winner of Most Stylish Men September 2019
5 Must-Have Summer Accessories Women Should Have
How to Incorporate Your Leggings for Your Business Casual Look
What is the Best Color to Wear On a First Date?
Why Is Online Betting So Popular?
A Guide to Treating Yourself This Winter